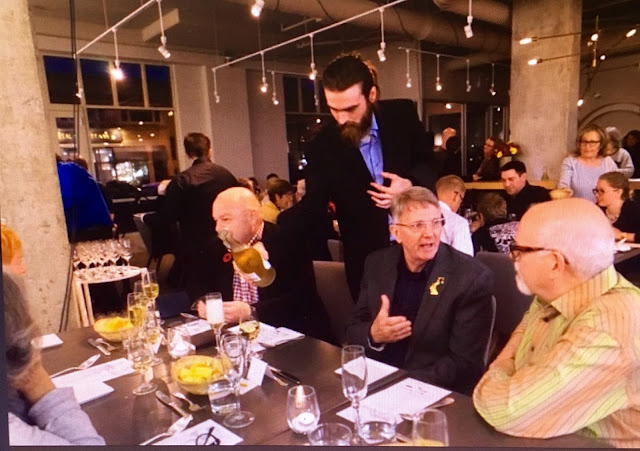 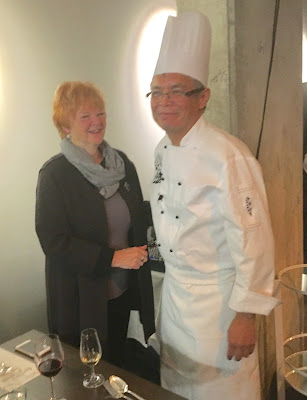 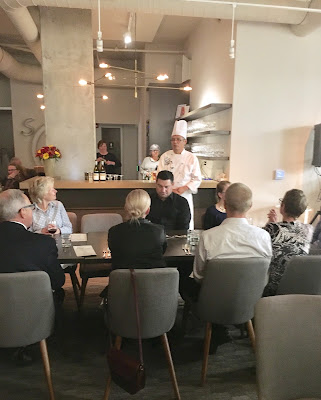 DigiWriting Book Marketing Agency (producers of the Stratford Writers Festival) launched Appetite for Words: A Literary Festival with a Culinary Twist! at Stratford Chef School at end of October 2017, with Chef Andrew George Jr. At the literary-themed dinners, food is paired with the author’s readings, so participants can taste the words they’re hearing.

Canada 150 has been a year-long celebration of the sesquicentennial of Canadian confederation. Fifty years ago the Canada Pavilion at Expo 67, Canada’s centennial celebration in Montreal, contributed to strengthening a powerful cultural unity. At the time the pavilion’s two restaurants were seen as providing a national culinary narrative. Restaurant La Toundra, operated by CN Hotels, served a Katimavik (which means “meeting place” in the Inuktitut language) Special that included chilled Okanogan apple juice and “Tourtière Chateau” with buttered peas and Saratoga chips. This was followed by Coupe Innuit [sic].This conceptualization of a Canadian cuisine was viewed as an all-encompassing initiative containing regional dishes and traditions derived from the First Nations and other clichéd multiculturalism stereotypes within the country. It seems to me the idea was to unite all recognizable cultures practising their own culture within Canada.

Canadian cuisine really is an abstract concept, indefinable due to the contradictory nature of Canadian identity. Indeed, ours is a complex identity, and paradoxically includes vast cultural and culinary differences. For many years serious attempts to define a national cuisine have either met with derision or devolved into stereotypes.

If you were to ask most people about what is meant by Canadian cuisine, many would respond with the stereotypical dishes like cod tongues, prairie oysters, Nanaimo bars, poutine, tourtière, back bacon, Montreal-smoked meat, butter tarts, seal flipper pie or fried bannock – a bread introduced to First Nation communities by Scottish settlers. It would seem to be unjust to identify one particular dish as being emblematic of Canadian cuisine.

Co-Founder, Stratford Chefs School, Eleanor Kane said, “It only seems right that chef Andrew George, Jr a member of the Wet’suwet’en First Nations people be invited to be Stratford Chef School Gastronomic Writer in Residence, during sesquicentennial year.” The program is one-of-a-kind and unique to chef training in Canada. Launched in 2007, the program is sustained by the family of the Joseph Hoare, former food editor at Toronto Life magazine, and a group of other donors. The school's previous writers in residence have had wide-ranging experiences in gastronomy, but have been mostly celebrated authors or columnists. Chef is the co-author of Modern Native Feasts: Healthy, Innovative, Sustainable Cuisine; and A Feast for all Seasons: Traditional Native Peoples’ Cuisine

At the Appetite for Words Literary Dinner at Stratford Chefs School featuring Chef George, he spoke about giving instruction to both first and second-year students ranging from cultural writing to recipe writing. Chef also talked about his journey from the Bush (Wet’suwet’en traditional territories and camps) to the World Culinary Olympics in Frankfurt.

The Wet’suwet’en First Nations are semi-nomadic with two semi-permanent camps villages on the Bulkley River and around Broman Lake and Francois Lake in the northwestern Central Interior of British Columbia. Chef tells us, “The Wet’suwet’en First Nations follow the cycle of the Salmon People”. Fishing for salmon is just as an essential aspect of First Nation’s culture as eating it. It’s difficult to measure the incredible bearing salmon has had on the Native people of British Columbia. Salmon has been central to the First Nations diet, economy and mythology for centuries.

Going back and looking to tradition, Chef was required to do a lot of research to write his cookbook. He spoke to us about translating personal history into a cookbook.  He said he first he looked to his ancestors and his elders for guidance. There weren’t any written recipes and cooking was based entirely on oral history. Part of the difficulty and challenge was that it might take ten English words to describe something fundamental to the Wet’suwet’en First Nations culture.
A Feast for all Seasons: Traditional Native People’s Cuisine is not only broken into seasons but into elements of water, earth, land and air. There is significance in fours, directions, seasons, elements and colours.  The book pays homage to clan gatherings and respect for the land. For everything that is taken from the land, there is always something given back. When First Nations communities think about the future, they’re not just considering the next generation, they’re thinking about the following seven generations, George explained. This long-term perspective makes them exceptionally competent to cope with climate change and other environmental issues.

George has travelled the globe world to demonstrate and promote the traditions and techniques of First Nations cuisine. He was part of the first all-Aboriginal team at the World Culinary Olympics in Frankfurt, Germany, in 1992. George was head chef at the Four Host First Nations pavilion during the 2010 Winter Olympics in Vancouver. George was one of 25 international chefs to participate in an event called Culinary Diplomacy: Promoting Cultural Understanding through Food, by invitation of Hillary Clinton and organized by the US State Department in 2012. 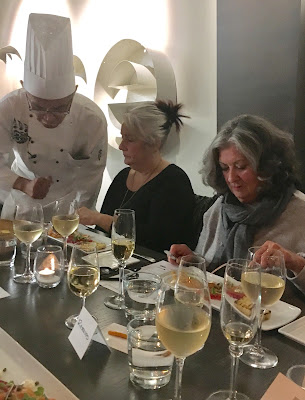 Popular posts from this blog

March 19, 2015
Ann McColl Lindsay and David Lindsay: A Brief History of a Road Less Traveled Hospitality and the culinary arts have always gone hand in hand. In London, Ontario, we have a history of exceptional restaurateurs, chefs and culinary retailers. Among the latter are Ann McColl Lindsay and David Lindsay, the former proprietors of the legendary Ann McColl’s Kitchen Shop, one of Canada’s finest cookware shops. Ann and David met, married and taught school in Windsor, Ontario from 1961 to 1968. They resigned their positions, sold their red brick bungalow, and embarked on a year-long food pilgrimage across Europe while camping in a Volkswagen van. Travelling in the van with a gas burner allowed them to truly enjoy the local terroir. The first six months of their trip , which ended at the French border, is described in Ann’s memoir Hungry Hearts – A Food Odyssey across Britain and Spain . The second volume, Hearts Forever Young, includes their travels in France, Italy, Austria
Post a Comment
Read more

Homage to The Indomitable Marika Hayek of Budapest Restaurant

December 06, 2018
BY BRYAN LAVERY It saddened me to read of Marika Hayek’s passing earlier this week. Budapest Dining Room and Tavern, a local gem with yards of red velvet and charming unintended kitsch continued to evolve while its grand interior remained virtually unchanged. The décor with plush velvet valances and curtained alcoves, brocades, red and gold wallpaper and comfortable armchair seating evokes another era. The Roma “Gypsy-style” aesthetic is also the restaurant's brand. It became both an anomaly and anachronism. The restaurant's two main rooms lead back from Dundas Street and are linked by an arched passageway across the middle, an ornate banquet hall at the far end, and the kitchen at the other end. There is almost always a musician—a piano player with a penchant for delivering uninvited political observations—playing the sentimental melodies traditionally adopted by Hungarian Romani musicians. He plays to the Budapest's patrons between brief monologues. He is p
Post a Comment
Read more

January 13, 2015
By BRYAN LAVERY Dining at T.G.’s Addis Ababa is characterized by the ritual breaking of  injera ( the traditional yeast-risen flatbread which is spongy in texture, crèpe-like in appearance with sourdough tanginess) and sharing food from a communal platter signifying the bonds of loyalty and friendship. For more than a decade, T.G.’s Addis Ababa has offered a tour de force from the Ethiopian culinary repertoire. This is refined Ethiopian cooking.    The modest restaurant is tucked away off-the-beaten-track in an unassuming brick building the south side of Dundas Street, near the corner of Burwell and Maitland. Having avoided the Eritrean – Ethiopian conflict in 1998, with little more than determination and a leap of faith, T.G. was eager to resettle her life in London. It was a tough route that included being detained in the United States for five months before she received refugee status in Canada.  Initially, T.G. was employed at a variety of jobs
1 comment
Read more